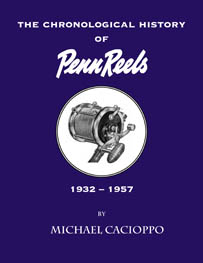 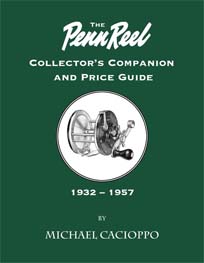 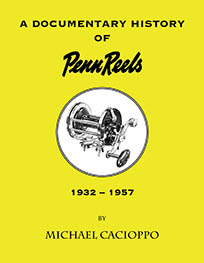 (Description) One 3-book set of the Hardcover Limited Edition set of 100 copies (matching numbered). Each book signed and numbered by the Author on publisher's bookplates. This listing is for all three books together and will not be split up. ***Synopsis - The Chronological History of Penn Reels, 1932-1957) One of the greatest success stories in the history of fishing tackle is the Penn Fishing Tackle Manufacturing Co. of Philadelphia, Penn. Founded by Otto Henze in the teeth of the great depression, Henze revolutionized the field of saltwater angling, making the sport affordable for the working man by creating brilliantly simple and rugged fishing reels that would stand up to generations of use. Here, for the first time ever, Penn reel historian and collector Michael Cacioppo takes you through the history of Penn year by year, from its founding in 1932 through its 25th anniversary year of 1957. ***Synopsis - The Penn Reel Collector's Companion and Price Guide (ISBN:9781936702886) A companion volume to Mike Cacioppo’s The Chronological History of Penn Reels, 1932-1957 — considered by many to be “The Blue Book” for Penn reel collectors — this book brings together a veritable treasure of Penn reel information that did not fit the parameters of the first book. In addition, The Collector’s Companion includes a detailed Price Guide to all Penn reels sold by the firm in the first 25 years of its existence. The essays include detailed information on the Penn Prototype Models F and K, the earliest days of Penn reels, the Penn Sea Hawk, the Sea Ford, the Bay Side, the Long Beach, Quick Take-Apart Penns, the indomitable Squidder, the legendary Senators, Penn trade reels, left-handed Penns, color variations of Penn reels, South African exports, light tackle Penn casting reels in the pre-war era, Penn Anniversary reels, the Penn formula, and hot rod Penns of alantani.com. The Price Guide includes individual listing of every model Penn offered year-by-year from 1932 through 1957, with prices included for every known reel. Based on the author’s experience with buying and selling thousands of Penn reels, as well as closely following the Penn reel market for over a decade, the prices will help collectors and resellers alike better ascertain the value of their vintage Penn reel. ***Synopsis for A Documentary History of Penn Reels, 1932 - 1957 (ISBN: 9781945565014) This companion volume to The Chronological History of Penn Reels, 1932-1957 and The Penn Reel Collector’s Companion & Price Guide, 1932-1957, the long-awaited A Documentary History of Penn Reels, 1932-1957 contains rare documents and photographs pertaining to Penn history during its first 25 years. It is divided into three sections: Section One, which covers original documents and letters to and from Penn and photos from Penn’s first ledger book; Section Two, which contains a complete set of Penn catalogs from this period; and Section Three, a photographic essay of Penn during this era. A must for any Penn collector! Here, for the first time ever, is a complete set of Penn Fishing Tackle Manufacturing Co. catalogs and other documents and photos pertaining to its first 25 years of history. From the unnumbered Penn flyer for the Model K, to Catalog #1 in 1933 through Catalog #20 in 1957, this volume reproduces every page of every Penn catalog during the years 1932-1957, including rare pocket catalogs. It also includes everything from correspondence between Otto Henze and other tackle makers, to images of the first sales ledgers, to photos of the factory floor. This work will serve as a standard reference for many years, as well as a great companion to the previous two Penn histories in this series. A must for any Penn reel collector, dealer, or historian!

Jacket Condition: in As New DJ

Autograph: Signed by the Author